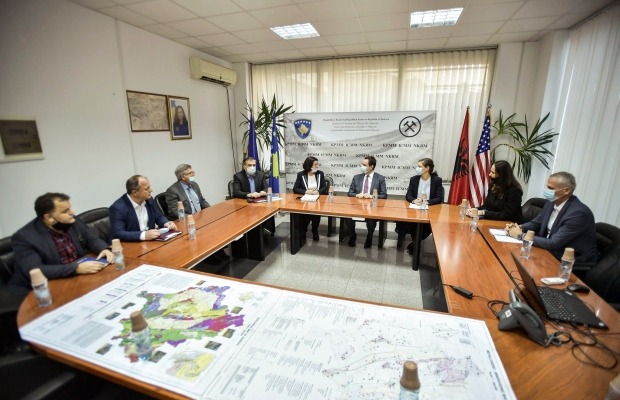 The Republic of Kosovo is a country rich in mineral resources managed by the Independent Commission for Mines and Minerals and which it is the responsible for the optimal utilization of these resources in its whole territory.

The ICMM is the third institution in the country that collects the highest revenue to the budget of Kosovo, near 30 million executed revenues enabling it to be an important indicator to the economic development of the country. The visit held on 21 December 2021 in the ICMM by the Prime Minister of the Republic of Kosovo, Mr. Albin Kurti, and the Minister of the Economy of the Republic of Kosovo, Mrs. Artanë Rizvanolli, show the dedication and high priority of the Government of Kosovo for mining sector.

The Chairwoman of the Board, Mrs. Selvete Grajqevci- Pllana in the opening remark of this meeting, was grateful for the interest of Mr. Kurti to see closer the work of the ICMM, and she emphasised that it is the first time that a Prime Minister of the Republic of Kosovo visits the ICMM.

Prime Minister Kurti, expressed openness to increase the cooperation in the future, between Ministries he leads and the ICMM, through the structuring of laws and Mining Strategy in the Republic of Kosovo.

The Minister of Economy, Mrs. Rizvanolli, in her speech, among other things, required as well professional advices for better function in order to increase the dynamics of the mining sector, in compliance with the Mining Strategy 2010-2025, for execution, cooperation and increase of the mining capacities in the future. She expressed that the Law on Mines and Minerals shall be reviewed in order to include the necessary amendments. The Minister Rizvanolli, expressed her concerns for the lack of professional mining-metallurgical staff, she expressed her readiness to stimulate young people to select the fields of this sector for studies, as well as the possibility of providing scholarships for studies abroad for this field.

The Chairwoman of the Board, Mrs. Grajqevci- Pllana, explained that because of the long period without Board in the ICMM, the application’s number of enterprises for permits, licensing and extension of licenses has reached up to 300 applications that shall be reviewed, hereupon it is considered a work with priority, and they are continuing with weekly meetings until the completion of this process. Her concerns were as well the strategic investments, interconnection cooperation as well with other Ministries, respectively it is mentioned the case with Forest Agency, that it delays obtaining consents and permits, necessary for licensing process in the ICMM. Another concern has been raised was as well for decision of the Ministry of Environmental and Spatial Planning and Infrastructure for the impossibility of obtaining a license for enterprises dealing with quarry.

Member of the Board, Mr. Gani Maliqi did a presentation on real state of minerals in the territory of Kosovo and he emphasised the need to amend the law, from the two laws that are now, to be made into a single one, as well the interdependence of the ICMM with other institutions of the country that are related to the mining sector.

Mr. Jahir Gashi, as a Member of the Board showed that the field spending 70% of energy of this institution is the management of illegal operations, the need to change the calculation of royalty and manner of collection of material means for the need of re-cultivation. He, among other things, emphasised that there are other challenges that we will discuss in continuity with the Minister Mrs. Rizvanolli.

Other concern of Mr. Gashi, was the loss and obsolescence of the data for the actual mining resources in the Republic of Kosovo, the lack of experts based on that that the most of mineral deposits of Pb-Zn are explored and opened with mining underground facilities and that these experts now are being retired and new generation do not have any basic information. It will be good to establish a professional team or group and to update and digitalise these data because it will come time when these data will be used.

The other member of the Board, Mrs. Makolli in her speech, explained that all this is related with non-function and failing to take adequate steps in court, after presenting the cases by the ICMM.

ICMM as an independent institution represents itself in court procedures that it means it initiates criminal charges and it does representation in institutions of justice, to Prosecutions and Courts in the whole territory of Kosovo. Legal representatives are professional staff and they have experience of more than 5 years in representations.

But, the Courts do not set the measures according to Article 80 foreseen based on LMM, the penalty with fine and imprisonment, but I hope and wish that we will achieve that these measures to be taken into consideration by Court in the future.

Other concern of Mr. Gashi was the loss and obsolescence of the data for the actual state of mining resources in the Republic of Kosovo, lack of expertise, manner of the royalty collection.

The Director of the ICMM, Mr. Krasniqi explained the state, function and staff with which the ICMM operates. His concerns were passive mines, minimal fines from Courts and environmental degradation.

Acting Chief Inspector of Mines, Mr. Sejdiu emphasised the importance of cooperation with Kosovo Police for operational plans. Mr. Sejdiu as well required from the Ministry to include the Inspectorate of Mines in the laws on salaries and to be ranked with the Customs and TAK inspector.