In the area of the Dardana Massif /Serbo-Macedonian Massif/ and Vardar zone (VZ), there are numerous ore deposits. These deposits were formed during various metallogenetic epochs and environments and belong to different metallogenetic provinces.

The territory of Kosovo is part of the Tethyan Eurasian Metallogenetic Belt (TEMB). It was formed during Mesozoic and post-Mesozoic times in the area of the former Tethyan Ocean on the southern margin of Eurasia, with the Afro-Arabian and Indian plates to the South. It extends from the western Mediterranean across the Alps and south-eastern Europe through the Lesser Caucasus, the Hindu Kush, and the Tibet Plateau to Bourma and Indonesia, linking with the West Pacific Metallogenetic Belt. The Karpatho-Balkan region is one of the sectors of the TEMB, characterised by some specific features.

The general geotectonic evolution of the region where the TEMB was formed is closely connected with the history of the Tethys. It is characterised by opening, development of island arcs and microplates, closing, welding of microplates with Eurasia, subduction of oceanic crusts, as well as collision of continents, continent-island arc collisions and underthrusting of continental crusts. The development of ore deposits and regional metallogenetic units is associated with specific tectonic settings within the individual sectors of the TEMB.

Based on plate tectonic concept it is possible to distinguish between:

The Serbo-Macedonian metallogenetic province is of main importance for Kosovo. This unit has developed along the suture zone of the former ocean. The ore deposits are commonly associated with Oligocene-Miocene volcano-intrusive complexes of calc-alkaline series. The most significant deposits (Staritërg/Stari Trg, Belo Bërdë/Belo Brdo, Crnac, Hajvali/Ajvalija, Kishniçë/Kišnica etc.) are those containing lead and zinc, to some extent copper and antimony, and are accompanied by gold, silver, arsenic, thallium, bismuth and iron. Several ore districts are distinguished, but for Kosovo more important is the Kopaonik ore district, characterised by hydrothermal-metasomatic replacement and vein types of Pb and Zn and other metals (Ag). Copper porphyry deposits inside other geological units are very important, too.

Principally, this province is located inside the Dinarides (as the regional geotectonic unit), but extends beyond them to the Hellenides. The endogenous ore mineralisation of the Dinaric province is mostly related to two metallogenetic epochs: the older Hercynian and the earlier Alpine.

The main mineralisation of Kosovo is associated with the Middle to Upper Jurassic ophiolithe complex (podiform, peridotite-pyroxenite deposits containing Cr, Ti, and Fe). At the same geological-geotectonic position, deposits of hydrothermal massive sulphide with pyrite and copper do exist (important deposits in Albania are associated with basalt from a volcano-sedimentary development).

Sporadically, Ni- and Cu-mineralisations can be found inside the Jurassic ultramafic units. They have been formed, similar to Cr and Ti, by a liquid segregation during the magmatic differentiation. 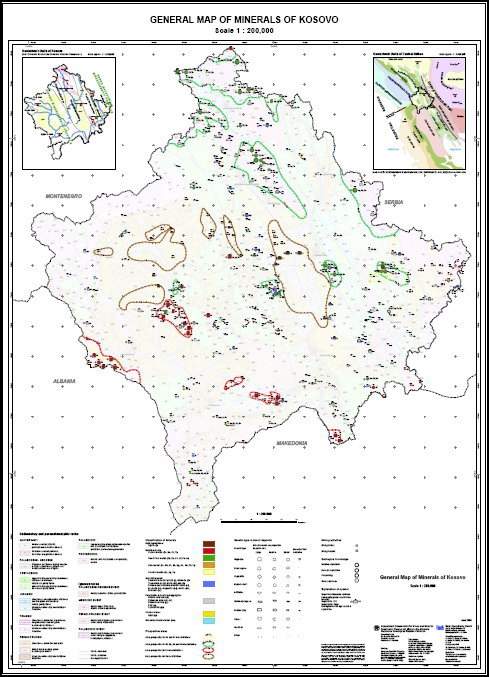